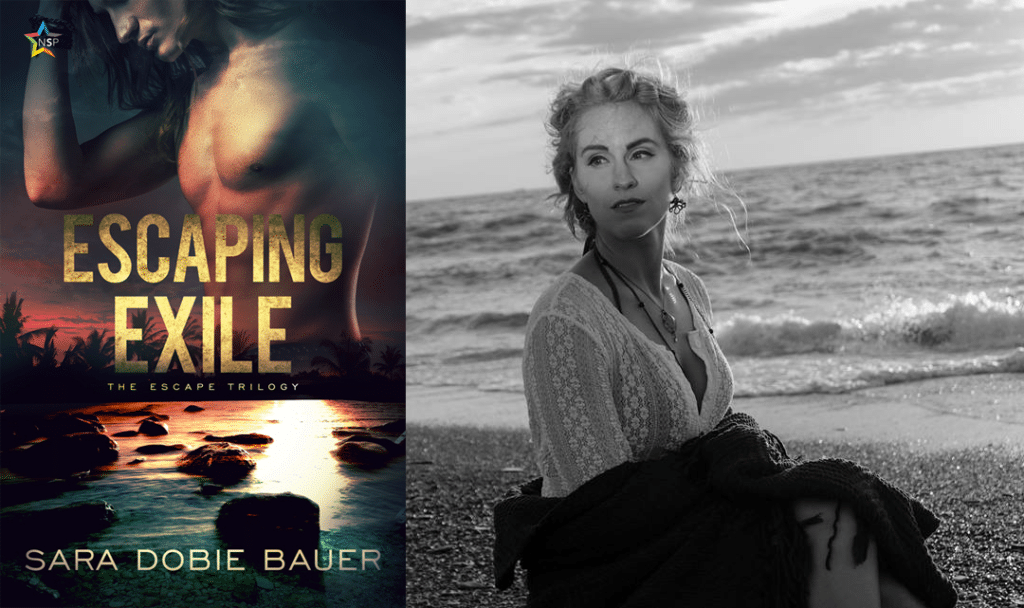 Today, I’m thrilled to share an interview with Sara Dobie Bauer, an author whose work I very much admire. She’s promoting her newest release, Escaping Exile, an M/M paranormal romance novella and the first in a trilogy. (Read my review of Escaping Exile here.) I loved getting a look inside her writer’s brain with these thoughtful answers to my questions; I hope you will, too!

Your writing credits include multiple genres and romantic pairings. What made you decide to write M/M romance?

It all started with Sherlockon the BBC. Despite the actors’ arguments to the contrary, I swear that show was a romance between Sherlock and his Dr. Watson. As soon as I heard about “Johnlock” fan fiction, the game was afoot (as Sherlock would say). I started writing my own—because it was so easy. The way the show was directed and acted? I don’t care who you are; those boys were gay for each other.

The Johnlock fixation exploded to original characters. My first published M/M original fiction was a short story called “Don’t Ball the Boss” in Stoneslide Corrective: still one of my faves because I got to flex both my comedic and sexy time literary chops.

Escaping Exile is a novella that takes place almost entirely on a small island, yet the historical setting and vampiric elements necessitated some complex worldbuilding. How much pre-planning and research went into this story?

Oh, boy. I always duck and run over this question because the answer is (drum roll) very little. My writing is character driven, and the world springs up around the characters. Sometimes, my worldbuilding ends up being super strong; other times, it can be the weakest part of my writing as I fixate on character development instead. It’s when I find a good balance between both that my stories really shine. Luckily, the characters of Andrew and Edmund were grand (practically mythical) enough to grow a sexy, scary, violent world all via their dialogue, flashbacks, and jungle shenanigans.

In Escaping Exile, we meet Andrew, a swoon-worthy vampiric hero with a villainous side. What tips do you have for writing a romance hero who is also monstrous? How do you balance that evil side with the qualities a reader would find appealing in a romantic hero?

(I’d ask you the same question. I mean, How to Love a Monster, anyone?) It’s an interesting game to play. Step one: I made Andrew super hot because I’m shallow and I like hot guys. Step two: I gave him both good and bad characteristics. Sure, he murdered a young prostitute in New Orleans … but he’s also hell-bent on keeping Edmund alive. It’s a delicate balancing act, which is honestly true beyond the romance genre.

Some of the best villains have a charming side. Think Hannibal Lecter. He eats people, but you can’t help but root for him. In Andrew’s case, yes, he’s a bad, bad dude—but he’s also an animal in the sack with a sense of humor and a soft spot for his shipwrecked sailor. Maybe that’s part of it? Give the monstrous dude something to love and show how his sharp edges are dulled by the power of passion and need to protect.

It’s rare to come across a romance story written in first-person, present tense (one of my favorites to write and read). What made you choose that for Escaping Exile as opposed to the more common (at least in romance) third-person, past-tense?

Honest answer: I’m selfish and, like you, love reading first-person, present tense. It’s so dang visceral! I also was never sure I would seek to have this story published. Initially, I wrote Escaping Exile for me because I felt like writing something really dark and super sexy. I wanted to escape my brain for a while. It was, at first, just a standalone novella that NineStar Press eventually accepted as a trilogy.

I like the conversational quality of this tense. I feel like I’m talking to my readers, and they’re listening—and hopefully getting off. I mean, writing sex is a turn on; reading it should be, too.

Escaping Exile is the first in a trilogy. In Exile, we meet one on-screen vampire besides Andrew, his coven leader Michelle. Will we meet more vampires in the upcoming installments?

So many more vampires ha! Mainly, it’s Andrew, Michelle, and the seriously naughty Felipe (who you get a glimpse of in Escaping Exile). That’s part of Andrew’s challenge throughout the rest of the series: how does he protect Edmund from the literal monsters of his past? Especially when Edmund is such a sexy snack? Of course, it you know Edmund, you know the boy can handle himself just fine.

What are you working on now? What can readers look for next from you?

Right now, I’m writing a new adult LGBTQ romantic comedy featuring a monster. (As a horror movie freak, I love monsters!) Next up publication wise, Escaping Solitude (part two of The Escape Trilogy) is out in October. I’m one of the featured authors in Cwtch Press’s Blood in the Rain 4 in October and also a “longest night” anthology in December. To keep up with all new releases and follow along with The Escape Trilogy, sign up for my newsletter! 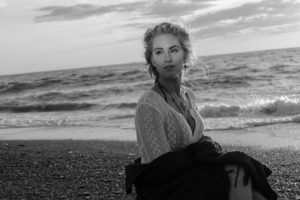 Sara Dobie Bauer is a bestselling author, model, and mental health / LGBTQ advocate with a creative writing degree from Ohio University. Twice nominated for the Pushcart Prize, she lives with her hottie husband and two precious pups in Northeast Ohio, although she’d really like to live in a Tim Burton film. She is author of the paranormal rom-com Bite Somebody series, among other sexy things. Learn more at http://SaraDobieBauer.com. 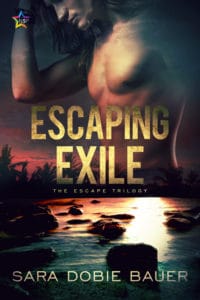 Andrew is a vampire from New Orleans, exiled to a tropical island in the 1800s as punishment for his human bloodlust. During a storm, a ship crashes off shore. After rescuing a sailor from the cannibals native to the land, Andrew becomes fascinated with his brilliant, beautiful new companion, Edmund.

Edmund is a British naturalist who has sailed the world seeking new species. Intrigued by creatures that might kill him, immortal Andrew is this scientist’s dream—but so is making his way back home. Edmund will fight to survive, even while wrapped in the arms of a monster.

As light touches and laughter turn to something much more passionate, the cannibals creep ever closer to Edmund. Can the ancient vampire keep his human alive long enough to escape exile and explore their newfound love, or will Andrew’s bloodlust seal his own doom?

This website uses cookies to improve your experience while you navigate through the website. Out of these, the cookies that are categorized as necessary are stored on your browser as they are essential for the working of basic functionalities of the website. We also use third-party cookies that help us analyze and understand how you use this website. These cookies will be stored in your browser only with your consent. You also have the option to opt-out of these cookies. But opting out of some of these cookies may affect your browsing experience.
Necessary Always Enabled

Any cookies that may not be particularly necessary for the website to function and is used specifically to collect user personal data via analytics, ads, other embedded contents are termed as non-necessary cookies. It is mandatory to procure user consent prior to running these cookies on your website.